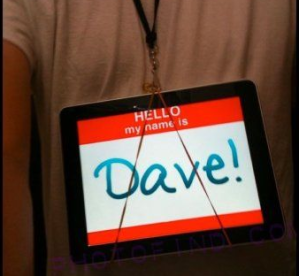 A few posts back, I noted that new artifacts are always to some extent “underdetermined”; that is, different groups will often have conflicting opinions as to what the new artifact actually is, and what it is good for. One current example of this phenomenon is some recent discourse surrounding Apple’s sexy new tablet: the iPad.

Earlier this week, a colleague and good friend of mine from the UK sent me a news story about a member of Parliament reading her speech from an iPad instead of a printed piece of paper. At first I was perplexed, as I couldn’t imagine why this was newsworthy, but the article explained that this was indeed the first instance of an MP using the new tablet device (instead of the more traditional printed paper) during a speech. It also explained that electronic devices like laptop computers have always been banned from the chamber. But the iPad posed a bit of a quandary: is it just a portable computer in a different form-factor, or is it more akin to electronic paper? How you answer that question determines whether the MP’s use of the iPad was appropriate or not.

As it turns out, the iPad has recently made a few appearances in other political assemblies as well. In June of last year, a similar incident happened in the German Parliament, where the use of laptops is also banned. In December of last year, US Representative Henry Cuellar (D-TX) was questioned over his use of an iPad during his speech. In his defense, he wittily replied “I’m not using it to play Angry Birds!”

It seems that the US House of Representatives, like many parliamentary bodies, has traditionally banned the use of electronic devices, especially those that can receive and transmit information over communication networks. Interestingly, the reason is not based on a concern for security; rather, it is a concern for “decorum” and the need for representatives to avoid outside distractions while in session. Laptop computers and mobile phones fall into this category of “distracting devices,” but the US house does currently allow “unobtrusive handheld electronic devices” such as Blackberrys, and now it would seem, iPads.

Why are iPads allowed while laptop computers are not? If you try to answer this from a technical perspective, you would just become frustrated. After all, an iPad is really just a somewhat-simplified laptop computer in a different form factor, and it can offer up just as many distractions (if not more) as a full-fledged laptop. To answer this, we need to remove our engineering caps, and don our sociological ones instead.

The difference between the two really lies in the social meanings this culture attaches to the respective devices. At some point in the past, these politicians achieved some degree of “closure” on their meaning of the laptop computer, characterizing it as a device that is too distracting for use within the chamber (for the concept of closure, see the SCOT framework developed by Pinch and Bijker). When the iPad was introduced, the culture was faced with the task of constructing a meaning for the new device, and as is typical, different groups within the culture have tried to characterize it in terms of categories they already knew. Some have argued that it should be banned because it is just like a laptop computer, while others have advocated that it should be allowed, because it is just an electronic version of the paper and pens they already condone.

Those of us in education will also soon face this same quandary (if you haven’t already). The iPad is a perfect medium for interactive textbooks and could become a decent note-taking device if Apple devises an easier method for silent text input (perhaps a chording keyboard?) Should we resist it, arguing that it is too much of a temptation towards distraction? Or should we embrace it and actively try to shape it into something beneficial for students? I think the latter is possible, but only by conscious, active engagement at this most-critical stage of adoption.